There's a great energy in Northern Ireland right now and the area is literally crammed full of breath-taking sights both natural and man-made. The Sperrin Mountains, bounded by Strabane and Magherafelt are threaded with streams and small roads; while the granite Mountains of Mourne in County Down are so awe-inspiring that they have been deemed an Area of Outstanding Natural Beauty, and boast over 350 ancient monuments dating from around 7000&-35000 BC.

The Great Outdoors is at its very best here, so add some activity to your holiday - whether you crave gentle strolls with plenty of fresh, clean air along Helen's Bay, in North Down; exhilarating water-sports around the glistening Fermanagh Lakelands; cross-country cycling around Gortin Glen Forest Park in County Tyrone; fly fishing around Corbet Lough, County Down or even sailing around white water coastline at Portrush, County Antrim.

A land rich in history, there are unique cultural traditions embedded in this part of the country, including the Ulster-Scots language of Ullans and the dulcet tones of the Lambeg Drum, fife and fiddle accompanying melodic square dancers and marching bands. Christian Heritage also reverberates around Northern Ireland, with the island's Patron St. Patrick founding his first church in Armagh during the 5th century, and Downpatrick becoming his reputed burial spot after he introduced Christianity to the Irish people.

Belfast, the capital of Northern Ireland, is a city bursting with life and energy. It's great for entertainment, shopping and some great attractions. Take a wander around the city and visit the fashionable Cathedral Quarter. Don't forget to visit the Titanic Quarter, take a boat trip on the river and see where the famous ship was constructed.

Titanic Belfast is a must-visit. It is an iconic six-floor building featuring nine interpretive and interactive galleries that explore the sights, sounds, smells and stories of Titanic. It is the world’s largest Titanic visitor experience and is located beside the Titanic Slipways, the Harland and Wolff Drawing Offices and Hamilton Graving Dock – the very place where Titanic was designed, built and launched in 1912.

Titanic Belfast tells the story of the Titanic, from her conception in Belfast in the early 1900s, through her construction and launch, to her famous maiden voyage and subsequent place in history.

Next to it is SS Nomadic, the last remaining White Star Line vessel and the biggest Titanic artefact in the world. Famous as a tender for Titanic, and a quarter of her size in every dimension, guests can marvel at the original ornate doors, panels, plasterwork and staircases that greeted first and second class passengers on board, as well as see what life was like as a crew.

Take the Causeway Coastal Route from Belfast via Carrickfergus, checking out its 800 year old castle on the way, then the A2 to Larne. This route has been rated one of the top five road trips in the world. From here travel north and enjoy the spectacular scenery - at times you're just metres from the sea spray. As you continue on your journey the nine Glens of Antrim will unfold before you. Stop off to explore them, along with the white, windswept beaches. At Glenariff Forest Park take a pit-stop to enjoy the glorious woodland walks. There are beautiful villages dotted along this coast, and we recommend you stop for lunch at the picturesque village of Cushendun. From here, take the road hugging the coastline to Torr Head for views over to the Mull of Kintyre. Returning to the Causeway Coastal Route, head towards Ballycastle before taking the coast road to the Carrick-a-Rede Rope Bridge, where walking across and back over an 80ft chasm will give you a pure adrenaline rush.

In the morning head back along the coast road to the Giant's Causeway - you''ll need time to appreciate this awesome feat of nature. Legend has it that the Irish giant Fionn Mac Cumhaill (Finn McCool) built the causeway to walk to Scotland to fight his Scottish counterpart Benandonner.

The Giant’s Causeway is an iconic World Heritage Site. The famous basalt columns of the Causeway landscape, left by volcanic eruptions 60 million years ago, are home to more than Finn McCool. Its nooks and crannies are dotted with dainty sea campion, and defensive fulmars protect their cliff nests.

Rising and blending into the landscape, with walls of glass, basalt columns and a state of the art interior, is the award-winning Giant’s Causeway Visitor Centre. The energy efficient building boasts exhibition areas and a grass roof with 360 degree views of the Causeway coastline. This is where the science and stories come to life. Nice cáfe and gift shop.

Heading west take in the ruins of medieval Dunluce Castle, teetering out over the ocean, or breathe in the fresh air at the beaches of Portrush or Portstewart. Look out for the glorious Mussenden Temple overlooking the 9 mile long Benone Strand, before heading on to Londonderry city for an overnight stay.

Take time out to walk Derry/Londonderry's city walls lined with cannons, taking in the richness of the sights and attractions scattered around the city, which hark back to another era entirely. Then head south on the B48 and A32 towards Enniskillen, County Fermanagh. There's plenty to enrich your journey as you pass through the gloriously scenic Sperrin Mountains; and you can take a small detour to visit the Ulster American Folk Park, just outside Omagh, County Tyrone, which is one of the best open-air museums of its kind, detailing why two million people left Ulster for America during the 18th and 19th centuries. Nearby, Gortin also has a magical forest where the flora and fauna can be viewed in all their glory.

Finish your day in Enniskillen Heritage Town and make sure to visit the impressive Enniskillen Castle, built some 600 years ago by the Gaelic Maguires. The Castle houses Fermanagh County Museum and The Inniskillings Museum, which are known jointly as Enniskillen Castle Museums. Note: Enniskillen Castle Museums is currently undergoing major redevelopment, due for completion in 2016. Visitors can still enjoy The Inniskillings Museum within the castle grounds at a reduced admission rate, while Fermanagh County Museum's Medieval Maguires display remains open for visitors on the ground floor of the castle keep. Major new galleries will also open during 2016 (watch this space!).

Diversion (at extra miles): Vist Belleek Pottery in Belleek, on the banks of the River Erne, home to the world-famous Belleek Fine Parisian China.

Potter around the Fermanagh Lakelands for a while, as you’re perfectly placed for magnificent Lough Erne and even a day on the water, where you can savour the purity and wildlife that surrounds you.

Take a wander around Castle Coole, County Fermanagh – one of Ireland’s most sumptuous stately homes; or explore the Marble Arch Caves, County Fermanagh, an underground world of tunnels, rivers and waterfalls.

Then it’s time to head towards Portaferry in County Down (via A4, M1, A49, A24, A25) where you can stay overnight in this pretty waterfront village. Access to the village is via the car ferry from Strangford.

Day 5 - Strangford Lough and back to Belfast

Portaferry lies on the edge of Strangford Lough, a breath-taking sea lake. Head north up the east coast for more stunning views. Enjoy watersports or a boat trip, then relax at one of Greyabbey’s teashops and Mount Stewart House, with its much admired gardens. Then it’s back to the buzz of Belfast city where your journey began.

Note: This tour is for information only and is intended to show you some of the possibilities for enjoyment. Always check your route and distances and allow plenty of time for stop-offs, diversions, rest and relaxation. This tour is based on a tour featured on Ireland.com, the website of Tourism Ireland and is drawn upon with their permission. We have, however, highlighted Heritage Island Attractions (Ireland's Premier Attractions and Heritage Towns) along the journey or nearby and these feature on the map below. If you have any suggestions for additions to this tour we would love to hear from you.

Roll over the map pins to view attraction names. Click 'view' on a marker to go to the profile of the attraction. 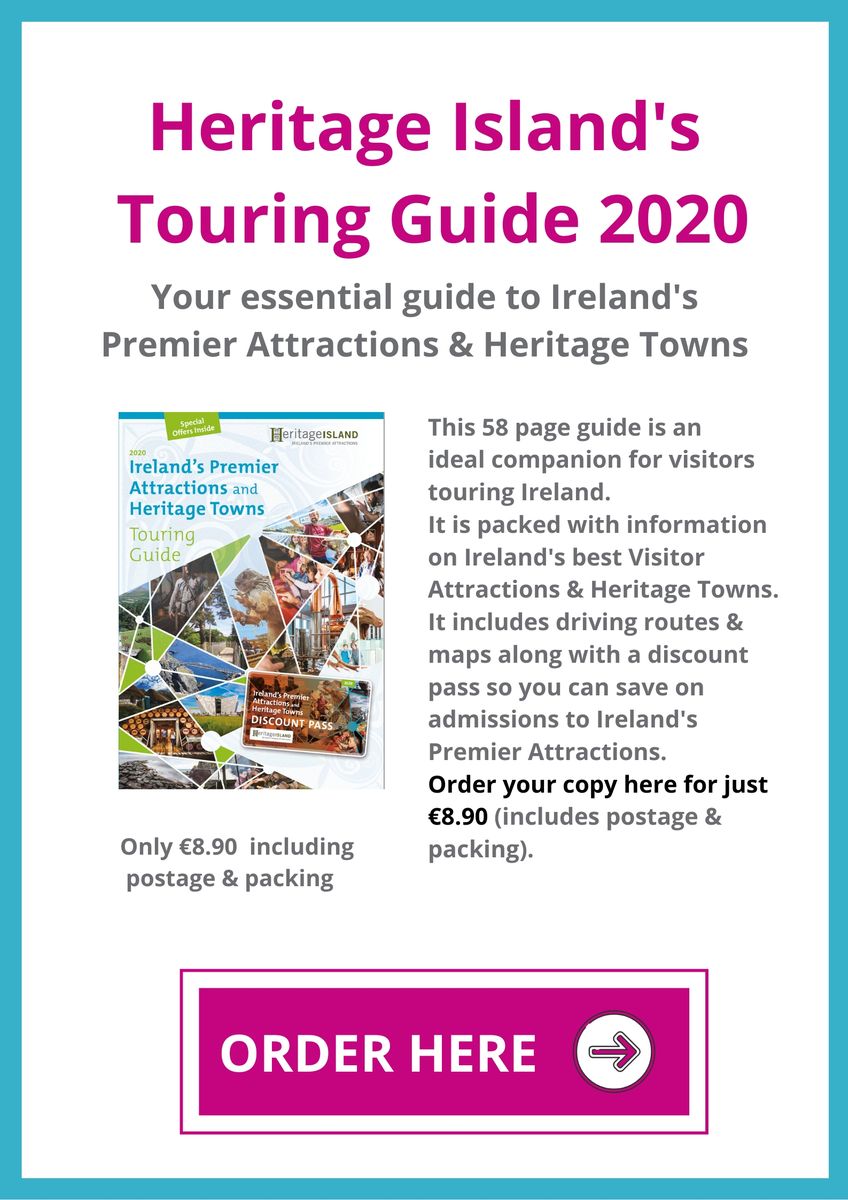