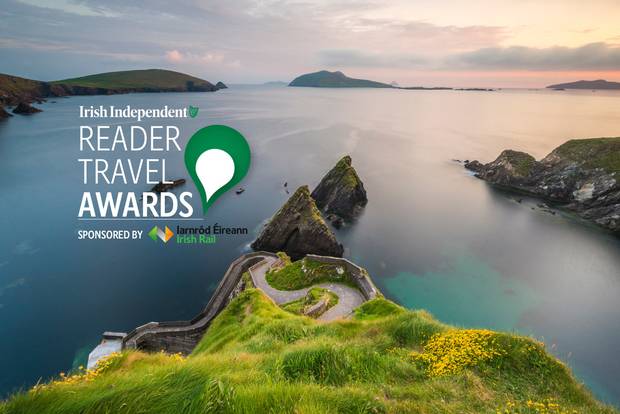 We are delighted to announce that three of our Premier attractions have been shortlisted for the Irish Independent Reader Travel Awards 2019.

The winners will be revealed at the Awards Ceremony in Dublin's Mansion House on January 17th 2020.

Our members shortlisted as per below:

For more information on all of the shortlistees please click here.

The fully immersive experience will transport visitors back in time to Wicklow Gaol in the 1700’s – a grim 3-dimensional world of corruption, rebellion & dark dungeons.

Some of the Gaol’s most notorious prisoners will feature & there is even a guest appearance from one of the Haunted Gaol’s famous ghosts!

The hugely anticipated new experience has been made possible following the awarding of a €200,000 grant from Fáilte Ireland. 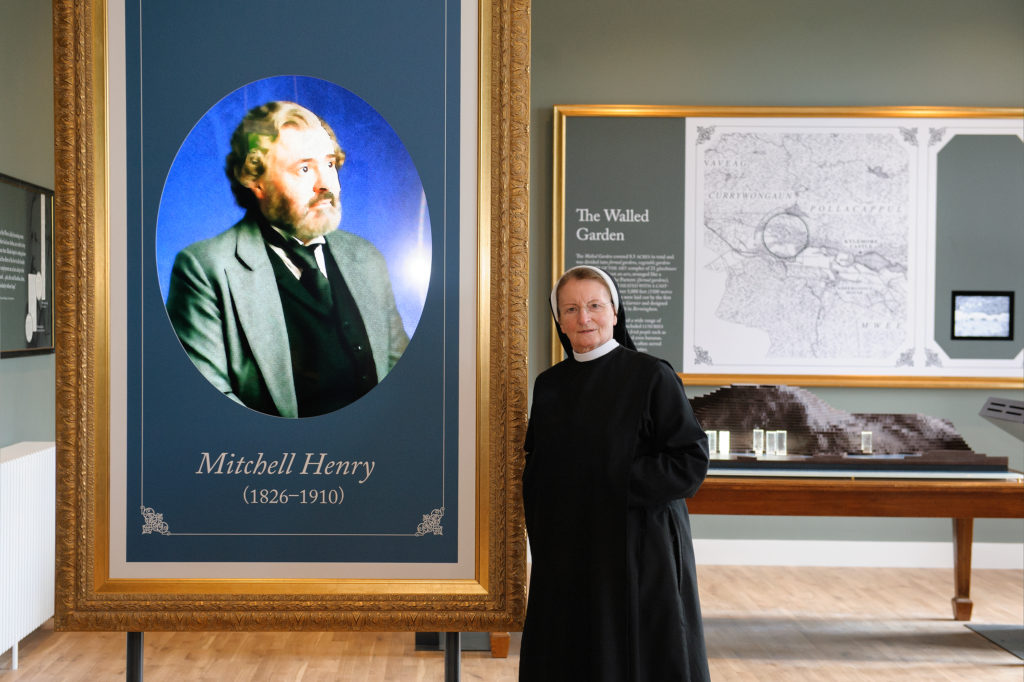 Officially opened by Minister for Transport, Tourism and Sport, Shane Ross. The new addition to the visitors centre was made possible with a €1.7m grant from Fáilte Ireland, under its Grants Scheme for Large Tourism Projects 2016-2020 initiative.

From Generation to Generation… The Story of Kylemore Abbey is a new multimedia presentation-taking visitors on a journey through history, connecting tales of romance, innovation, politics, tragedy, and spirituality. This presentation includes historical footage, archive photographs and artefacts, and speaking portraits. As part of the investment, the Abbey’s interior was redeveloped with a large new wing of four authentically refurbished rooms for visitors to discover. 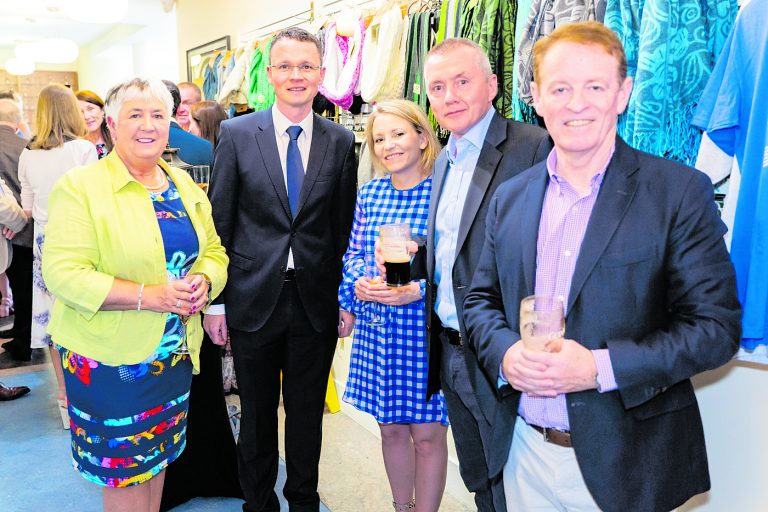 On July 8, 1989, the late Hollywood star, Maureen O’Hara Blair officially opened the museum at a colourful ceremony attended by hundreds of overseas and local supporters and dignitaries.

“It’s hard to believe that 30 years have passed,” museum director Margaret O’Shaughnessy said, recalling the big efforts that went into establishing the museum. “It all started with a big idea,” she continued, “but there was huge support for that idea from the late entrepreneur Tony Ryan and his company, Guinness Peat Aviation, Shannon Development and from former flying boat crew members and staff as well as from the local community council and in 1988 a small group of dedicated people set about making it a reality.”

The museum was intended to record and to celebrate Foynes’ unique place in Irish aviation history and its pivotal role as a transatlantic aviation hub from 1937 to 1945. It was also intended to remember those men and women who had flown and staffed the flying boats in what were difficult times and to illuminate the stories of those who passed through Foynes in those heady days.

Now known as the Foynes Flying Boat and Maritime Museum, it has garnered many awards and continues to be the global repository for the memories and memorabilia of the flying boat era and is the only museum of its kind in the world.

The museum now employs 26 people and attracts 60,000 visitors each year and these figures continue to increase, making it one of the prime destinations for tourism in Limerick.

The team at Belleek Pottery Visitor Centre recently celebrated their 30th-anniversary welcoming visitors from across the globe. 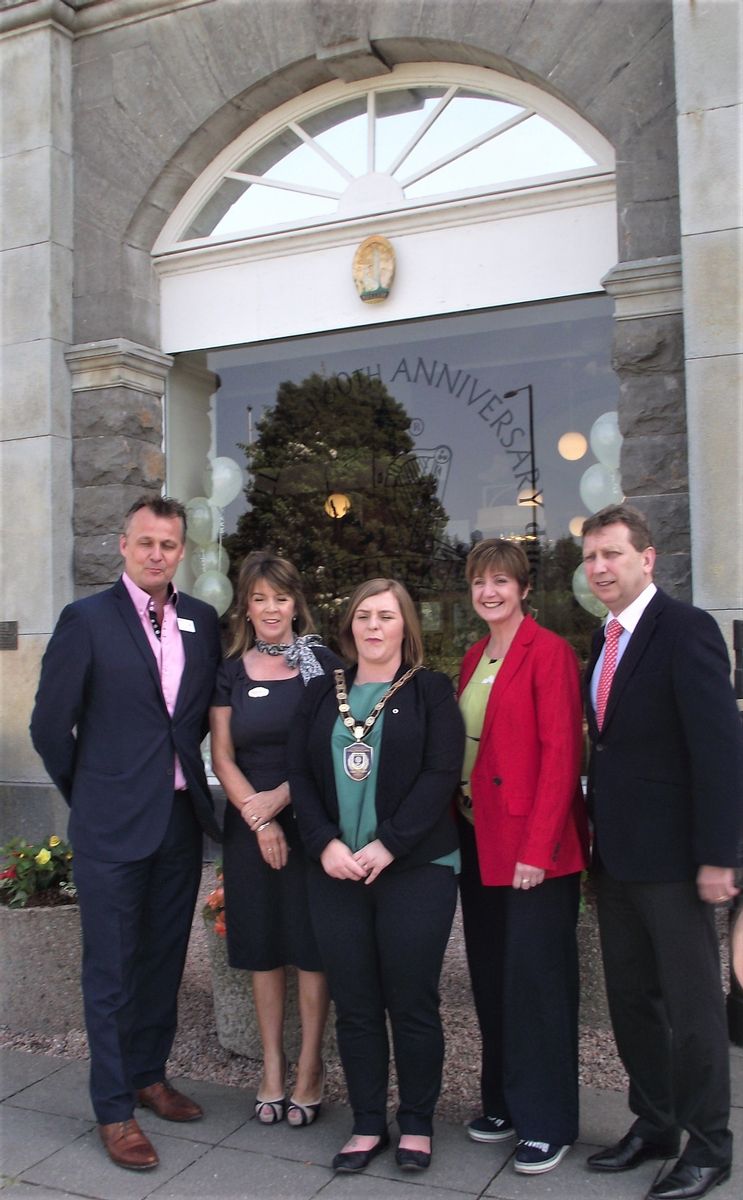 our visitor centre on the 28th June 1989. At the time, a brave decision we think!! The pottery had been welcoming visitors on an ad hoc basis down through the years, however, it became apparent during the 1980's that a visitor centre was an attraction that tourists would value.

At the time, we were not well known as a tourist destination and relied heavily on local holidaymakers with a few traveling from overseas (mainly America) to visit us and see how our pottery was made.

It was somewhat of a gamble to create a tourist attraction for Fermanagh at a time when peace on this island was an aspiration.

It is with great pride that we can say today that we are welcoming tourists from across the globe to visit Irelands oldest working pottery.   We are multi-award winning and continue to work hard to bring visitors to the pottery to participate in our tour.  We have welcomed more than 2, 000, 000 visitors over three decades, employed a significant number of tour guides and restaurant staff and have delivered tours to many different nationalities".

Ms. McCauley concludes, "This year the visitor centre has already welcomed tourists from America, Canada, Australia, Japan, China, Germany, France, G.B and Scotland.  We are hopeful of a busy tourist season and look forward to welcoming more visitors for many years to come". 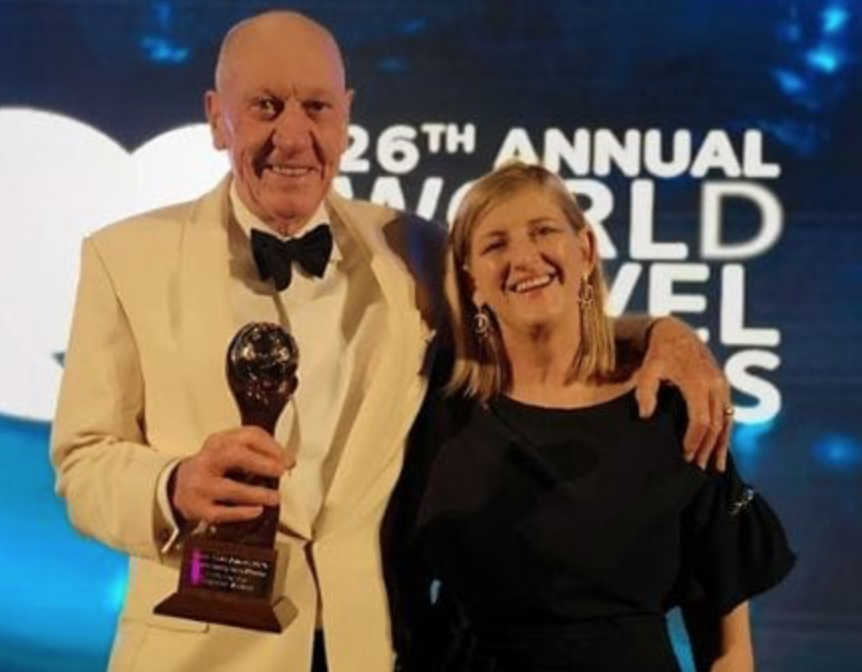 We are delighted to announce that EPIC has been voted Europe’s Leading Tourist Attraction 2019 at the 26th annual World Travel Awards, Europe’s most prestigious global travel industry accolade.

EPIC accepted the distinguished award, just three years after opening its doors to the public at The chq Building in Dublin, surpassing many long-standing tourist attractions such as Greece’s Acropolis, Barcelona’s Sagrada Família, Portugal’s Ribeira do Porto and Rome’s Colosseum.

‘It is truly an honour to receive an award of this magnitude; we are delighted to be named Europe’s Leading Tourist Attraction for 2019. We have thoroughly enjoyed welcoming the tens of thousands of people who have visited us both from Ireland and overseas each year and look forward to welcoming many more.

I have always believed that the story of Irish people around the world was worth telling, and so, I founded EPIC. When we opened in 2016, we had the vision to create a local museum that could connect globally. It’s very important that we honour the Irish diaspora abroad and recognise the vital contributions and monumental impact Irish people have made worldwide. It’s wonderful to be recognised for this award today, thank you to those that made this possible through hard work and dedication, and to those who voted for us.’

EPIC has welcomed over 300,000 visitors this year, and we proudly show the far-reaching influence of Irish people and 1,500 years of Irish history.

2019 Northern Ireland Tourism Awards were held in the Palace Demense in Armagh on Thursday 30th May. The awards brought hundreds of industry professionals together to recognise and celebrate the industry's excellence and innovation. Hosted by BBC broadcaster and presenter Jo Scott, the black-tie dinner and awards night featured a Georgian-themed marquee in the grounds of the Archbishop's Palace.

Heritage Island members to win on the night included: 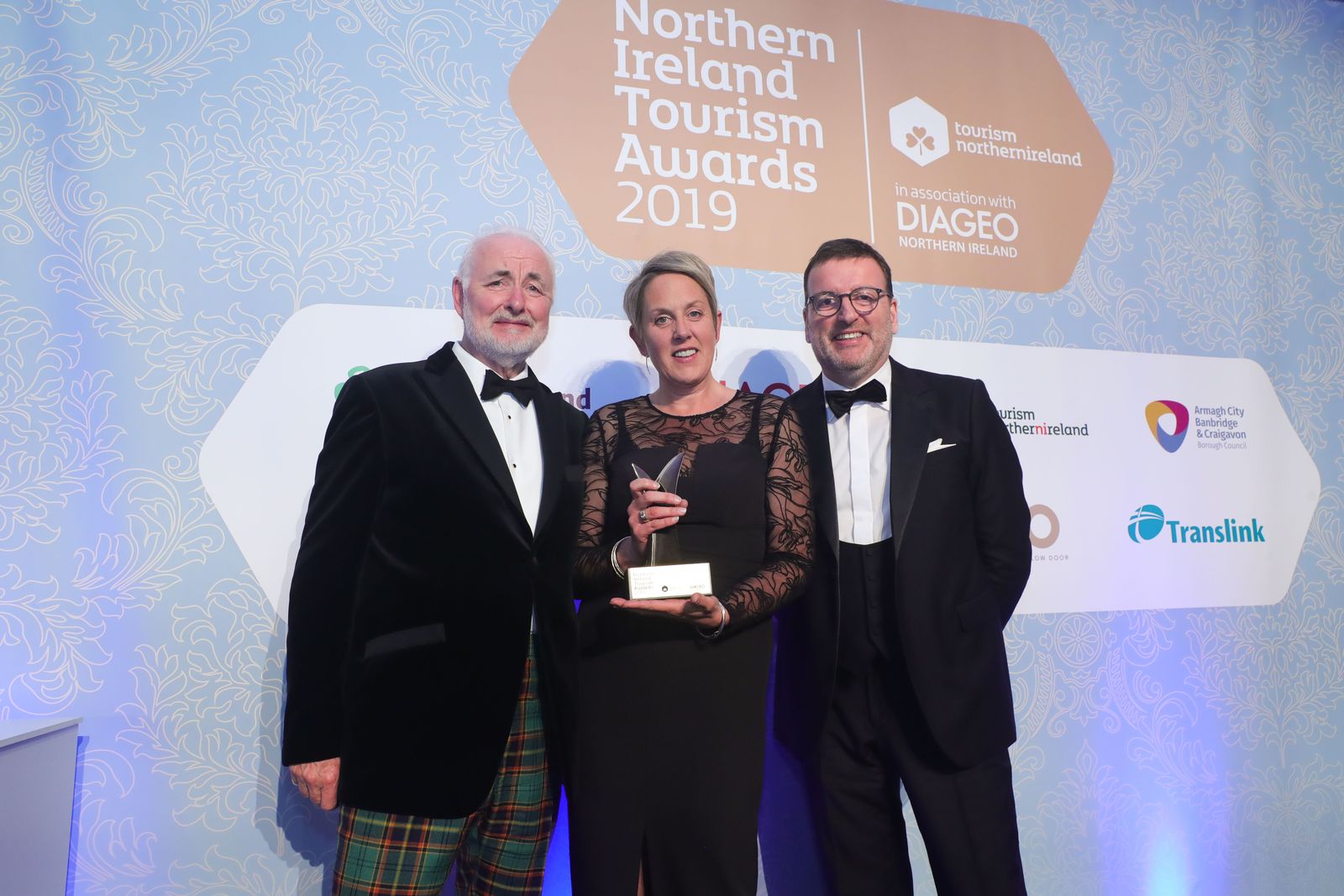 National Museums NI received the award for Outstanding Contribution to Tourism. Pictured receiving the award is Chief Executive of National Museums NI, Kathryn Thomson, alongside Paddy McKenna from category sponsor Diageo NI and Tourism NI Chairman Terence Brannigan. This award is on the back of a record-breaking year for National Museums NI who welcomed over 900,000 visitors, their highest visitor numbers ever, to their four museums last year.

Armagh Food and Cider Festival famed for its spectacular 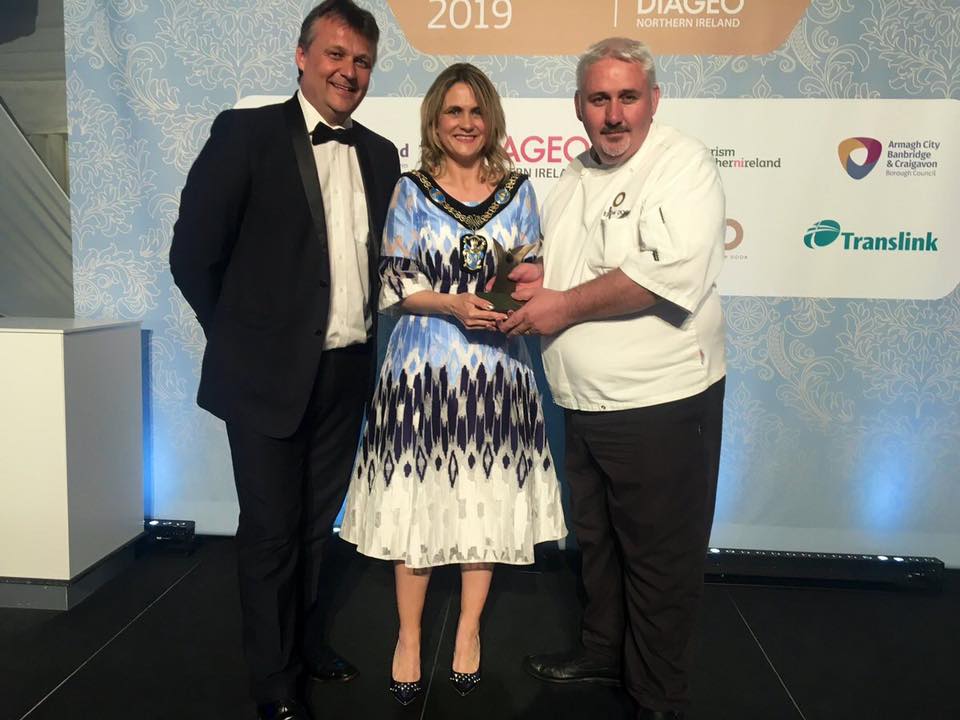